A one-day itinerary covering some of Biei and Furano’s most beautiful autumn sightseeing spots.

Hokkaido’s autumn comes a lot earlier than the rest of Japan. Whereas areas in mainland Japan start to see their autumn leaves around mid-to-late November, the first Autumn leaves can be seen in high-altitude areas of Hokkaido such as the Daisetsuzan National Park from as early as mid-September. Many of Hokkaido’s taller mountains see their first snowfall not long after the autumn leave reach their peak, so if you visit from around mid-October onwards you may see autumn scenery backed by snow-capped mountains. Disappearing almost as quickly as they arrive, the majority of Hokkaido’s autumn leaves have fallen by mid-November, giving you only a few short weeks to catch them in their prime.

As time is of the essence, one of the most convenient forms of transport around Hokkaido’s countryside locations is probably going to be rent-a-car. Whilst there are many places in Hokkaido to see some stunning autumn scenery, if you’re considering a road trip nothing beats the wide-open countryside roads of Biei and Furano. This article introduces an example one-day itinerary which includes some of the area’s most beautiful autumn spots.

Asahikawa has its own airport, making it easily accessible by plane from Sapporo or Tokyo.

One of Hokkaido’s larger cities, Asahikawa has a wide range of accommodation, entertainment and restaurant choices, making it a good base for exploring Hokkaido’s central area. If you’re planning to stay the night before setting off on your journey the next day, be sure to try out some well-known Asahikawa specialties such as shoyu ramen, or shinkoyaki grilled chicken.

A 30-minute drive south of Asahikawa will bring you to the countryside village of Biei which, with idyllic pastoral scenery to be seen wherever you look, is popular with amateur and professional photographers from both Japan and abroad.

Could these be some of Japan’s most famous trees?!

In recent years a number of Biei’s most eye-catching trees have become somewhat iconic thanks to being featured in the television commercials and ad campaigns of some famous Japanese brands. The trees form a part of the natural landscape which changes with the seasons, so you are guaranteed some amazing seasonal views at any time of year. To handle the number of visitors who come to see the trees in real life, you will find conveniently placed car parks close by, so please make use of these wherever possible. As the surrounding areas are private land, it is not permitted to enter any of the fields, however it is more than possible to take some amazing photos from the side of the road.

The Seven Star Tree, so called due to its appearance on the packaging of Seven Star cigarettes in 1976, is a large oak tree backed by colourful plots of farmland which stretch out like a patchwork quilt across the hills. The Seven Star Tree forms a part of the Patchwork Road, a panoramic route which runs through the beautiful Biei countryside.

This tall, straight tree is an eye-catching site in contrast with the surrounding flat farmland and short shrubbery. Made famous after being featured in an advertising campaign for the Nissan Skyline in 1972, to this day many Skyline owners bring their cars here to take photographs, so if you’re a fan of classic Japanese cars this is a spot not to be missed!

Yes, Biei even has its own Christmas tree! This 8-meter-tall spruce stands alone upon the hillside fields and, particularly when seen in silhouette, very much resembles a star-topped Christmas tree dripping with decorations. In the autumn the surrounding fields turn a gorgeous golden-brown, revealing a fantastic palette of green, gold and blue. The area is beautiful in winter too, when the tree is surrounded by fluffy white snow.

Be sure to stop off at one of the many quaint cafes which can be found around the Biei area, many of which pride themselves on their use of local ingredients and handicrafts.

Atelier Nipek is a café and gallery which displays the work of local photographer Toshiki Nakanishi. Located atop a hill overlooking the Tokachi Mountains, visitors can enjoy magnificent views as they sip specialty coffee.

Gosh is a coffee shop which specializes in dark roast coffee, blended with care to create a coffee with the perfect balance of bitter and sweet. The café serves a range of home-baked sweets and cakes, as well as breads made using flour produced in Hokkaido.

From spring through to autumn, a wide range of colourful seasonal flowers can be seen blooming across the panoramic flower fields of Shikisai-no-oka. A riot of colours in the summertime, in the autumn the fields begin to take on a muter tone, creating a more subtle palette of colours which can only be seen at this time of year.

Rising to worldwide fame after appearing as one of Apple’s iOS backdrops, this pond is characterized by its abnormally bright blue water and the almost otherworldly appearance of the petrified Japanese larch trees which rise straight up out of the pond’s surface.

The Blue Pond is particularly beautiful in the autumn, when the foliage surrounding the pond turns an array of warm reds and yellows, contrasting wonderfully with the surface of the bright blue water.

Don’t miss the most beautiful road in Japan!

Road 966 which runs between Biei and Shirogane Onsen is a short, 800 meter stretch of road located directly opposite Biruke no Mori, the Shirogane Onsen Information Center. Appearing in countless YouTube videos, this breathtakingly beautiful road has become popular with Japanese and foreign visitors alike! The road has been dubbed by many as the most beautiful road in Japan due to the perfect balance between the bright blue sky, the colourful autumn foliage and the distant snow-covered mountains.

Stop-by a restaurant in Furano to try out some local cuisine.

Furano Burger offers a selection of burgers and hot dogs, made using fresh, local ingredients. Located just outside of the city, here you can enjoy your meal outside with a view of the expansive countryside. 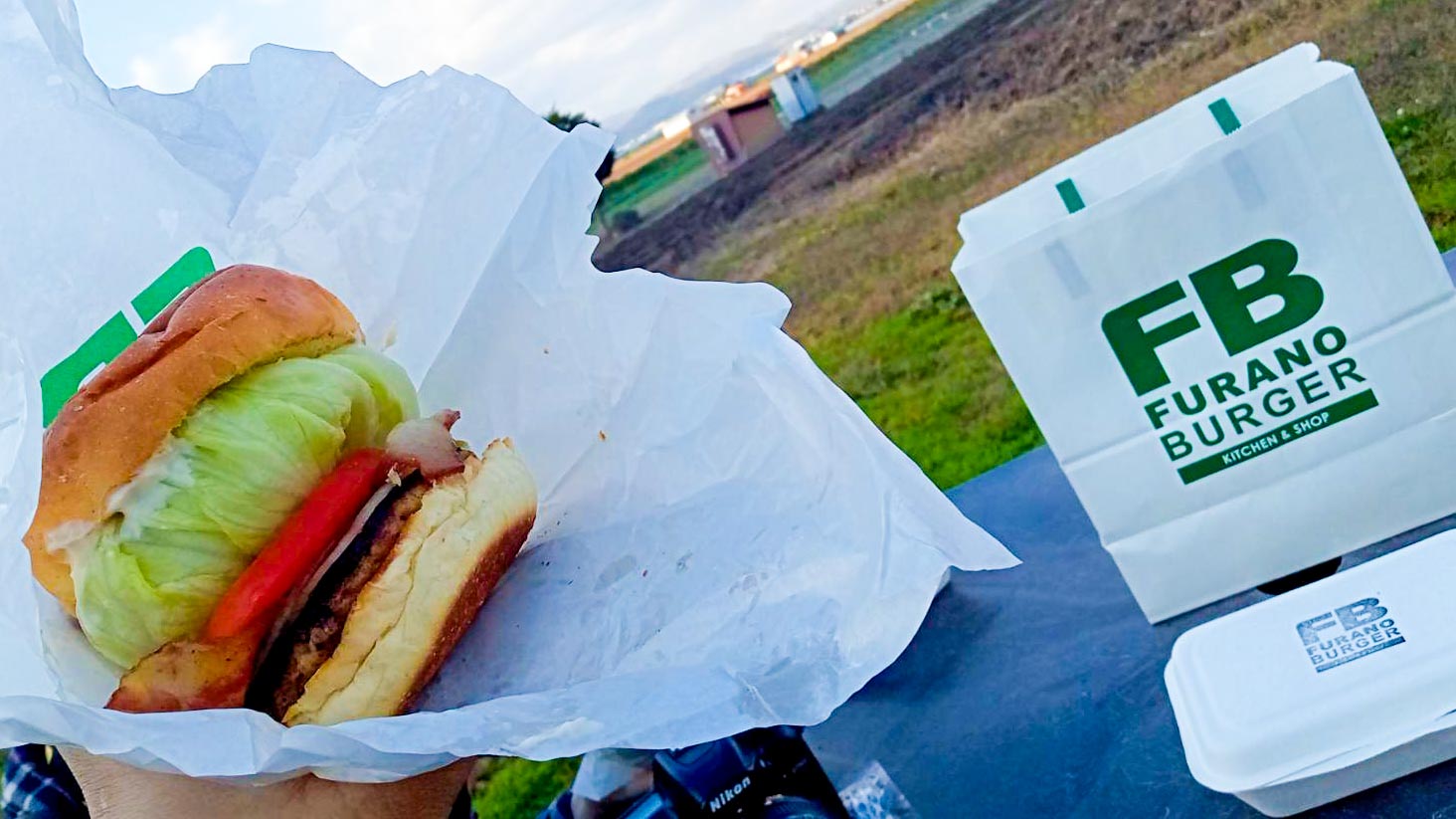 A café space created from an old wooden shed, at café Goryo you can try a delicious home cooked meal surrounded by a warm, woody interior, reminiscent of the Furano of days gone by.

Nature X Food X Curry and Rice is the concept of Yuiga Doxson, a friendly local curry shop which serves a range of Japanese curries made using ingredients produced in the natural environs of Furano. This local shop has a couple of branches around Furano, including a Japanese-style pub, as well as a bakery which can be found just next door to the curry shop.

The final stop on this autumn drive is Ningle Terrace; a tiny village of 15 little log huts hidden away in a forest within the grounds of the Shin Furano Prince Hotel.

You will truly feel as if you’ve stepped into a fairy tale as you wander through the forest, surrounded by lush greenery and rows of white birch trees. Each little hut reveals new wonders in the form of original goods, many of which are hand-made using natural materials; you are sure to find unique gifts which you will not find anywhere else!

Once you’ve explored Ningle Terrace, spend the night in Furano before moving on to the next leg of your journey, or hop onto the expressway, which can get you from Furano to Sapporo in around two and a half hours.